What's new with us

Welcome to our Blog!

Welcome to our blog! Learn more about the community we love to serve and our Urban Restoration Counseling Mission! 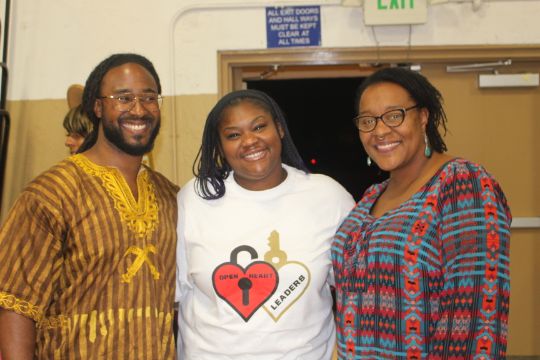 With 18 plus years of experience in corporate America and with ownership under her belt, it’s no surprise that April Laster is the CEO and founder of a well-known nonprofit organization in San Diego: Open Heart Leaders.

The organization, which specializes in helping people from diverse backgrounds and meeting people wherever they happen to be, vies to maintain a healthy connection between the physical, spiritual and emotional self. Furthermore, Open Hearts aims to restore broken networks within its community. But how did such a broad and significant mission begin?

“Open Heart Leaders wasn’t really a creation—it was a gift,” Laster said. “Really, I’m just the vessel. The programs and the services were already orchestrated in the community I grew up in, and somebody had to come back and be in charge, and that person was me.”

Laster, originally from Jackson, Mississippi, has been involved with her community since she was young. After being raised in California and receiving a degree in Telecommunications with a minor in business management, she soon launched her own media brand called LADY A. Throughout her time as both a host and founder, she has held various titles and attained a number of skills—all leading her to Open Heart Leaders.

For Laster, Open Heart Leaders has a specific mission statement that goes beyond the concept of merely being open. To her, it’s about the whole entity, not just the obvious misfortune or suffering one endures.

“In order for people to change, grow and release any type of hurt, trauma or pain, people have to be willing to set their personal feelings aside and deal with the facts of life,” Laster said. “Taking the facts of life means observing everything that makes a person a whole person. That’s their environment, the people around them, their upbringing, their courage in their mind and situations—all those things factor into where a person is.”

Open Heart Leaders recognizes their mission as an all-encompassing task and journey for each individual, which takes a special level of skill and expertise. To Laster, this means going above and beyond. It’s more than just a kind face, a listening ear or a shoulder to cry on. It’s also education and being vulnerable in the sense that complete honesty is crucial to success.

“We have to be the martyrs and the advocates that’s going to call people out on their faults and hypocritical stance that still collectively destroy marginalized communities of black and brown people,” Laster said. “Someone has to be willing to stand in the gap. Open Heart Leaders is willing to stand in the gap and bring clarity to a lot of the broken systems. By bringing clarity, we bring the research, data and facts that most people didn't want to put the time, money or effort into.”

Now, amid a global pandemic, times have certainly changed. Open Heart Leaders has adjusted accordingly, and is proud to have made the transition partially online and partially in person, dependent upon the service. Seeing clients face to face is a huge aspect of Open Heart’s mission statement and overarching goal, which has made the recent months a challenge—but not one that the organization isn’t willing to take on. In fact, a new department was recently launched about two years early as a result.

“One of the major points of the pandemic was that we had to launch our inner counseling department a little faster than normal,” Laster said. “That wasn’t set to launch until 2022, but based on life, we actually released it in May of 2020.”

Aside from their newest inner counseling department, Laster has specifically been using newfound time to perfect what Open Heart Leaders stands for. Being the CEO of the organization has equated to the vast majority of her time going towards Open Hearts, but that’s not to say she hasn’t enjoyed it.

“Being the CEO of a mental health service is tuning in on the gaps of my organization and closing in on those gaps. It allowed me to be still a little more,” she said.

For The Gender Phluid Collective (GPC), nothing stresses dismantling a sizable set of narratives better than their mission statement of helping one on one, one at a time. It’s no easy feat, but a communal effort and work done largely in part by Angelle Maua makes it a plausible reality. Armed with her own personal experiences and a multitude of support through local advocates and community partners, GPC is redefining intersectional identities in realistic, personable ways. Having grown up in Southern California and after relocating from Los Angeles to San Diego in 2018, it didn’t take long for Maua to get involved in the local community. Drawing from her own experience and relationship with her son, authenticity within a safe space was something she sought out but initially had trouble finding. “My son came out as transgender, and there were no services availabe for POC, or even just African Americans. I couldn’t find any resources or support groups,” Maua said. “Even though I got valued information from those spaces, it wasn’t a safe space for me and my son to be 100% authentic.” As a result, Maua created her own support groups during the latter half of 2018. In a moment which she defined as an “AHA” moment, Maua realized her past patient care experience had prepared her for what was to come. Wanting to cater specifically to the community in Central and South San Diego, Maua worked with South Bay Youth Services of San Diego and later the San Diego Public Library to provide a safe space for POC and people on the LGBTQIA spectrum. As for the organization's name? It came a bit later. “At first it was just called ‘Black POC Support Group,’ but everyone was like, ‘You need to find a name!’ And I was like, ‘Well, this is getting bigger than I expected,’” Maua said. So came The Gender Phluid Collective. The ‘Ph,’ which stands for the balance between gender identity and self-expression, correlates well with the group’s mission to help individuals become 100% themselves. During unprecedented times like that brought about by a global pandemic, nothing is more important to GPC than staying true to their roots—even if it’s not as simple as it once was. “That whole human touch component, just basic hugs and checking in, is needed right now. It’s very missed,” Maua said. “I know a lot of people thrive on that, like myself, being around folks.” In the end, however, it gives Maua just that much more to look forward to once restrictions are lifted. Once GPC is able to open its doors to the community in person, festivities will ensue. “Maybe some sort of light event like kickball or a barbeque, or just meeting at the beach and reconnecting,” Maua said of potential post-pandemic activities. For the time being, however, Maua is preparing to connect with another community: those in desperate need of COVID-19 testing. Previously a certified nursing assistant, Maua returned to medical assistant school in April when the quarantine first began. With graduation now a little over a week away, patient care and a yearning to develop and enhance her current skill set was the root of Maua’s motivation. “It just made sense to do something productive with my time and acquire new skills while I was just sitting around,” Maua said. “I’ll probably end up assisting in the COVID-19 testing with what’s going on right now.” Supporting her local community in countless ways, Maua now looks forward to a new type of engagement as she embarks on her nearing externship post-graduation. Likewise, GPC has adapted to an online support format to cater to its community’s needs. For more information on involvement and outreach, reach out to thegpcollective@gmail.com or visit GPC’s website at https://thegpcollective.wixsite.com/thegpcsd.